Beyond the Beaches in Hawaii

Today, it’s pouring rain in Seattle. In fact it’s rained so much that we’ve set a new record and according to NPR, Nov 19th is officially the rainiest day of the year! I badly need a new pair of rain boots that are actually waterproof. Sigh.

I’m recently back from a 10 day trip to Hawaii. This was my first time! We were on the Big Island and Kauai. While I enjoyed the beaches and got to do some scuba diving while on the Big Island, there was a lot of other things to like about the Hawaiian islands. Here’s a photo essay of some of my favorite things: bananas, sweet potatoes, taro fields, lu’au, kalua pork and of course the flora.

I haven’t traveled much since getting hit with all the food allergies and I’ll confess that I was slightly worried about how it would all go. We rented cottages on Airbnb and made sure we had a kitchen for me to cook in if needed. This helped a lot. I ended up cooking about 50% of the time and you can see below some of the produce I found at local farmers markets.

Fortunately, there were a few things I could eat out. Plate lunches included meat and white rice and often came with a salad. I got the grilled fish, kalua pork or poke (raw fish salad dressed in sesame oil) options and skipped the salad dressing. Laulau was another wholesome meal where the meat was covered in taro and ti leaves and steamed. Simple, yummy and very filling with rice. It was great for me that meats are usually simply prepared without a lot of sauces by grilling, steaming or roasting.

I’m counting on the memories, the remnants of a tan and hopefully lots of stored up Vitamin D to get me through another Pacific Northwest winter! The thought of the ski slopes opening soon does help too. 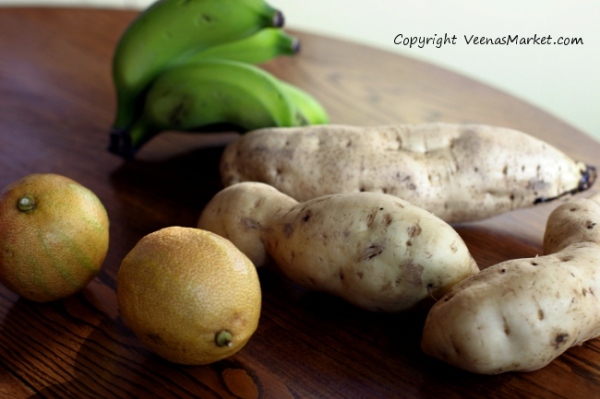 Hawaiian bananas, pink limes and sweet potatoes. The sweet potatoes had a very floral flavor when steamed. The local bananas were starchier and I liked them a lot bananas than what you normally get in the US. 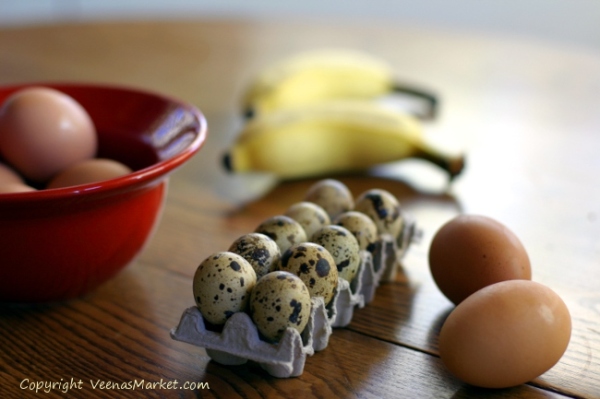 We treated ourselves to quail eggs one day! And those bananas went from green to yellow just in 2 days. 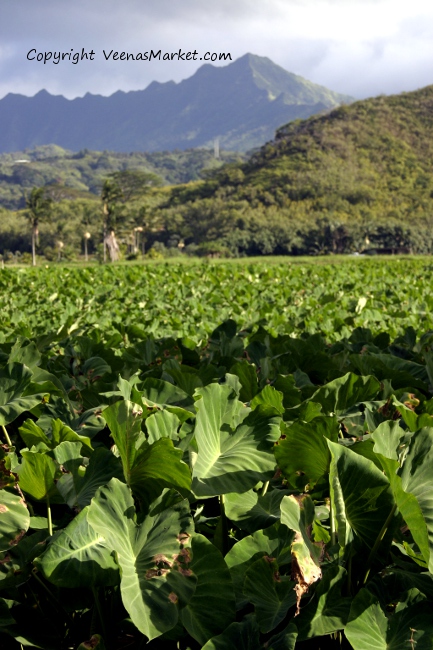 Fields of taro, the starchy tuber used to make the Hawaiian staple poi. The leaves are used to wrap around meat and steam, adding flavor and helping keep the moisture in. 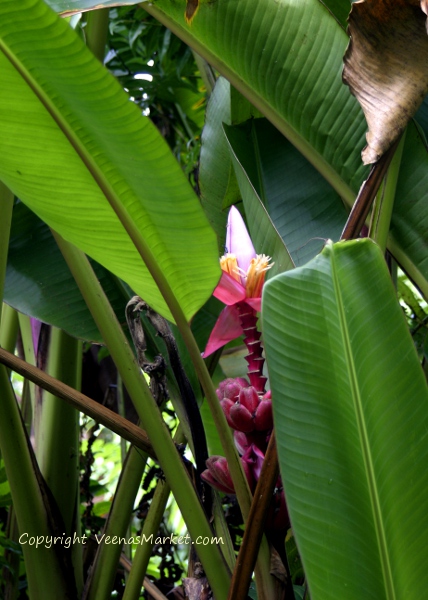 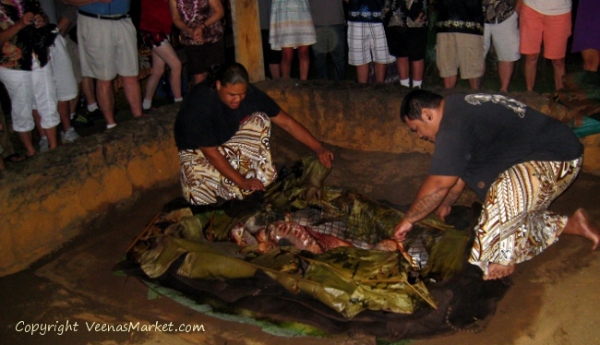 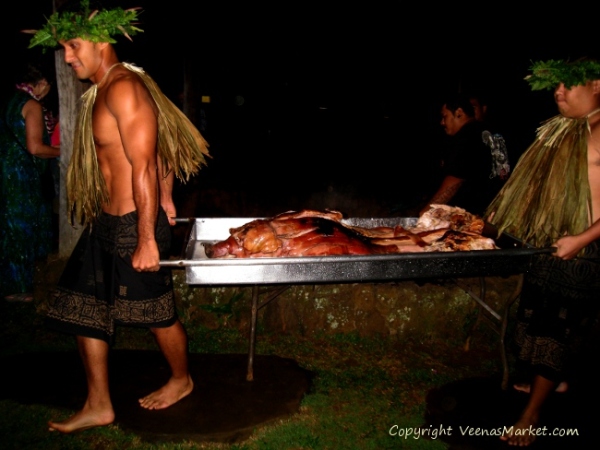 Kalua pork when cooked the traditional way in the imu 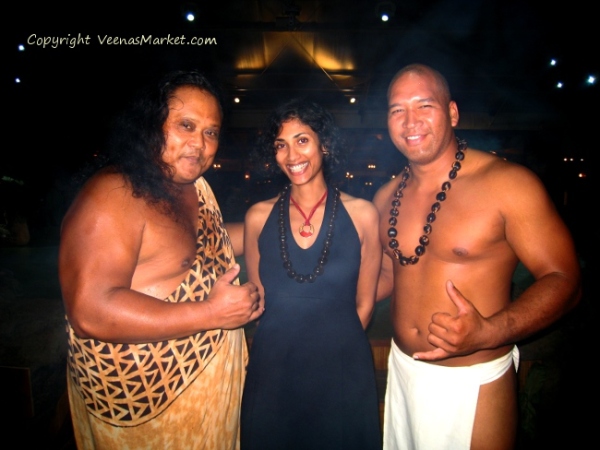 After the luau feast and show, very touristy but great show. 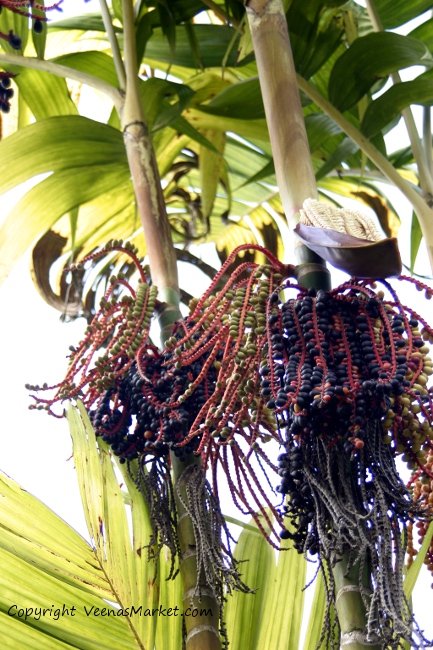 A Lu’au at Home 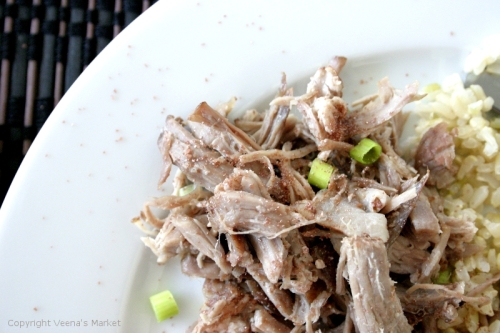 My mind is thousands of miles away as I write this post. I’m thinking of picture perfect beaches, volcanoes, and coral reefs. I’m thinking of the place where even just twenty years ago, ingredients for continental cuisine and chefs were flown in to cater to tourists.

In Hawaii, local food or lu’au food grew out of the ingredients and recipes that immigrants brought with them. While continental food was considered gourmet food in Hawaii, today, Hawaiian regional cuisine has made its mark. In the 1980’s, a group of chefs and restaurant owners got together and decided that Hawaiian food needed a makeover. They created dishes that incorporated Japanese, Chinese, Filipino, and other ingredients and styles, high quality local produce, and gourmet flair. They called it Hawaiian Regional Cuisine.

But back to Hawaiian local food.

My Hawaiian friend Annie Katrina Lee of Social Potato Chips, helped me plan a lu’au lunch a few days ago. She picked three lu’au favorites: lomi lomi salmon, chicken long rice and kalua pork. I was tasked with preparing the kalua pork while she brought the lomi salmon and all the ingredients for the chicken long rice dish. The food tasted outstanding and we could not stop stuffing ourselves. Check out Annie’s post here.

The kalua pork is traditionally made in a specially prepared underground pit. The process of cooking the pork this way is called imu. It takes hours to prepare the pit just right and the meat cooks in it for 8-12 hours. Once a big enough hole is dug, a layer of coconut husks goes in followed by hard wood. This is topped by a layer of porous rocks. The rocks are heated by burning the wood. Once the rocks are hot, the wood is removed, the meat placed on the rocks and covered by layers of ti leaves, coconut fronds, and heavy mats. The final step is to seal this with the dirt that was dug out to form the hole. Check out this YouTube video to see how it is done!

Sadly I don’t have a backyard that I can dig a hole in. So I followed this recipe. There is also a recipe that uses a slow cooker. The kalua pork was surprisingly easy to make, juicy tender and utterly flavorful. Best of all, you need just three ingredients. 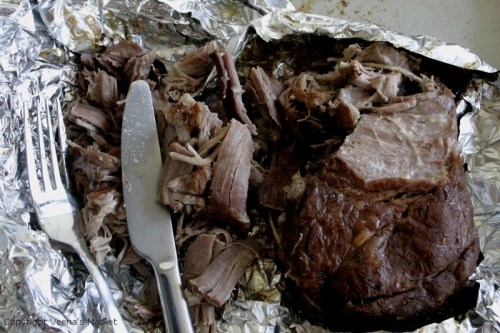 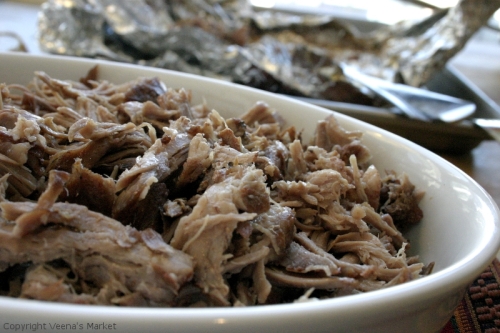 The recipe calls for pork butt roast. This is the same as a shoulder roast. Look for a fatty cut – you need that fat for slow cooking. I used roughly 2 lbs for 4 people and we had plenty leftover.

Hawaiian sea salt is saltier than regular sea salt. You can buy this salt online or in specialty food stores like Williams Sonoma. I used less salt than the recipe called for and it was perfect. I rubbed in 1.5 teaspoons at the beginning and less than 1/2 teaspoon after shredding.

I found liquid smoke at a regular grocery store. I highly prefer using natural ingredients to artificial flavoring and so I was hesitant to use liquid smoke flavoring at first. This first time around, I decided to stick to the recipe. I used 1 teaspoon as per the recipe. I plan to smoke the meat with wood chips on the grill or even using my big wok the next time around.

My roast was done cooking in 4.5 hours vs. the suggested 5 hours. So start checking after 4 hours.

Lastly, shred the meat with a fork while holding a part of it down with another fork. Cover up the meat immediately so it doesn’t dry before serving. 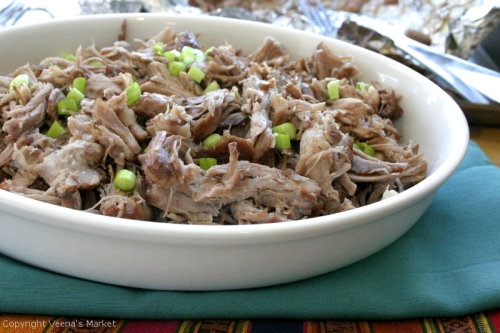 Kalua pork is ready to eat!

The lomi lomi salmon and chicken long rice that Annie made: 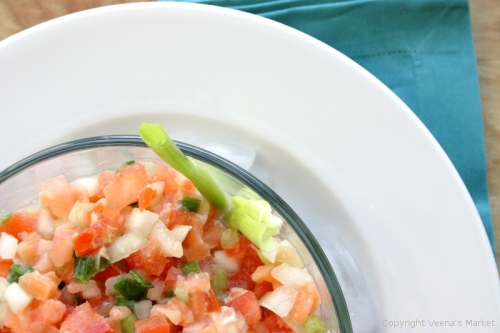 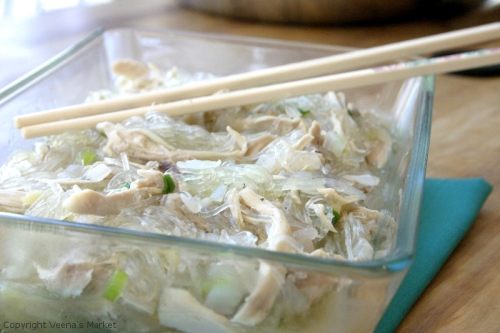 Chicken long rice - the long rice refers to the noodles